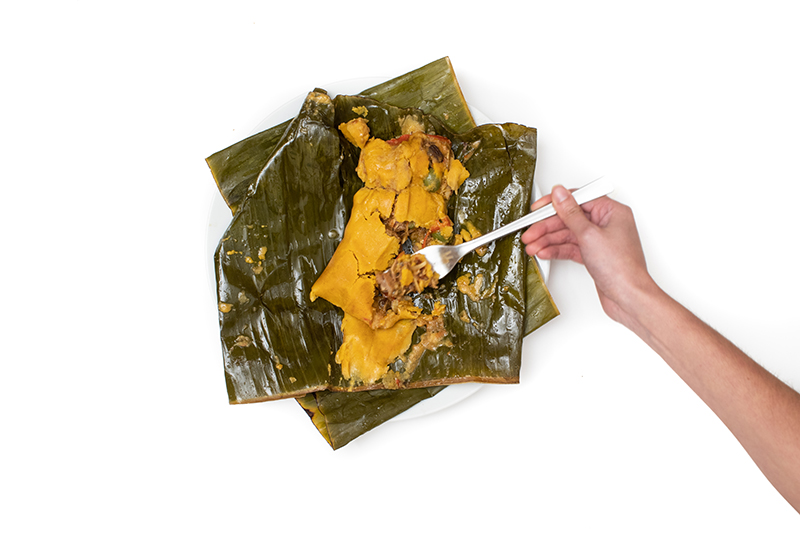 I spent all of last weekend preparing hallacas, which are a traditional Venezuelan Christmas dish eaten throughout all of December. Hallacas are a chicken and pork stew with almonds, raisins, olives, capers, and red peppers wrapped in a corn dough (Masa) then wrapped in a banana leaf. Yes, it’s as delicious as it sounds! It is a dish that encompasses the multicultural nature of Venezuela. It is said that the Spanish would give the indigenous people their leftovers, ie the chicken and pork stew with the Spanish ingredients of raisins, almonds, and olives. The indigenous people would take those leftovers and fill them in a corn masa and wrap them in a plantain leaf. Both corn and plantains are indigenous to South America. It is a beautiful mixing of cultures and flavors.

Gathering together with family to prepare the labor intensive dish is everything to me.   It is said that every hallaca is unique as every family adds their unique touch. Making time for family and tradition is something that gets easily lost in our busy lives. The preparation of hallacas is a time to celebrate family and the festive holiday season. We play the typical Venezuelan Christmas songs called aguinaldos, while we prepare them. If we do not continue our traditions they will slowly fade away and future generations will not know what they are.

Since I am following a ketogenic diet for my concussion, I decided to make a few substitutions so that I can still enjoy all the holiday traditions! For me, it’s ok if I fall in and out of ketosis. In fact its generally beneficial to follow a cyclical ketogenic diet. However, to promote healing in the body it is important for me to keep an anti-inflammatory diet.⠀

Because corn is genetically modified, laden with pesticides, high in sugar, and high in lectins, it is highly inflammatory and can lead to a leaky gut and a leaky brain. So this year I made my hallacas with a mixture of almond flour, coconut flour, and arrowroot starch instead! It was an experiment, but I’m so excited to be able to enjoy one of my absolute favorite dishes without worrying about how I will feel afterwards.  Update: They turned out just as the delicious as the corn version, or in my opinion even more delicious! Even my parents wanted some of mine! (We still made some of the traditional corn masa for the rest of my family.)⠀

With the few substitutions I made, hallacas became the perfect keto dish as the dough is made with chicken bone broth, bacon fat, and my family adds some olive oil into the mix too! Needless to say, I had to make a lot of bacon to get the bacon fat needed for the masa! Have been eating all the bacon this week! I only buy non-GMO, pasture-raised bacon with no added nitrates. Bacon fat from pasture-raised pork is actually filled with fat soluble nutrients that are good for us! Regular bacon with added nitrates is very detrimental to your health. Please, do not assume that any type of bacon is good for a healing ketogenic diet. Poor quality bacon may get you into ketosis, but it will still be highly inflammatory to your body and brain.

Above are pictured the different ingredients that go in the stew! Leeks, red peppers, tomatoes, and spring onions! I absolutely love how all the plant based ingredients are Christmas colors! Puts me in the holiday spirit! ⠀

The first step in the two day process is to make the stew. Pasture-raised chicken is boiled in water with leeks and Himalayan pink salt. The pasture-raised pork is boiled separately.

After simmering for 30 minutes or so, the chicken and pork are chopped into small pieces. Both the chicken broth and pork broth are stored until the next day to be used for the masa. We also buy Pacific foods chicken bone broth to supplement the broth. We always end up needing more for the masa! Its such an easy way to incorporate the healing benefits of bone broth into a meal!

The tomatoes used in the stew have to be de-peeled and de-seeded. This removes the high lectin content of the tomato. Lectins can be very inflammatory and can cause leaky gut. This is also the traditional way of preparing hallacas, as well as, any tomato sauce! The stem of the tomato is taken out and an X is cut into the bottom of the skin. Next the tomatoes are placed into boiling water for 1 minutes. They are removed and placed in an ice bath and the skin comes right off!

Next, the remainder of the ingredients are placed in a food processor and chopped finely. All the ingredients are then placed in a large pot and left to simmer for 30 minutes or so. The pork is then added and left to simmer for 40 minutes. Finally, the pork is added, and the stew is left to simmer for another 30 minutes. Once the stew is finished, some arrowroot starch is added in order to thicken the stew. (The original recipe calls for corn flour, but I have substituted with arrowroot starch). One other substitution I made in the stew was that I used apple cider vinegar for its healing benefits, instead of the red wine vinegar the recipe calls for. I use Bragg’s raw unfiltered apple cider vinegar with the mother. The stew is then set aside to cool, and later stored in the refrigerator for the next day.

The next day begins the long process of preparing the hallacas themselves! The day begins first by preparing the masa. With your hands, mix the almond flour, coconut flour, arrowroot starch, chicken broth, pork broth, bacon fat, and olive oil with annatto until a thick, malleable dough forms. Let the dough sit while you prepare the other ingredients. When ready to start preparing the hallacas, make approximately 3″ balls of the dough.

The plantain leaves are then washed and cut into smaller pieces. A dab of olive oil with annatto is smeared on the plantain leaf. Then each ball of dough is then rolled out with a rolling pin on a plantain leaf. Followed by a spoonful of the stew and a handful of almonds, raisins, capers, olives, red peppers, and onions.

The plantain leaf is then folded to wrap the filling. This short video gives a quick tutorial on how to fold the leaf. It is then wrapped in a second leaf and tied using string. Once all the hallacas have been prepared, they are boiled in water for an hour. They are left aside to cool and stored until ready to eat! They are then boiled in water for 30 minutes to eat. Boiling it in water, blends all of the flavors together. They generally taste better after the first day after especially the aroma of the plantain leaf seeps into the masa. Although we normally have one for lunch that day because we are starving and exhausted and can’t help but see how they turned out!

The leftover dough and the leftover ingredients for the filling are mixed together to make what are called bollos. They are little balls of the masa wrapped in plantain leaves. These are delicious with some fresh white cheese or on their own!

What’s your favorite holiday dish or family holiday tradition?! Any changes you make to accommodate your dietary restrictions?

"It's time to go back to nature and heal in bloom"

Stay up to date!